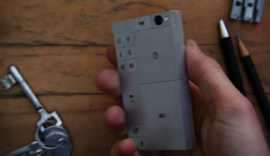 Though some take the DIY approach to replacing a faulty part in a smartphone, many elect to discard it in favor of an upgraded device, something that results in a fair bit of electronics waste. To mitigate this — and to make it easy for a handset to be upgraded — the Phonebloks concept has isolated components in removable blocks that can be swapped out with the turn of only two screws.

You can see how the phone is assembled in the screenshot above, with a full breakdown being demonstrated in the video below. The Phonebloks concept features the display portion of the phone, with a circuit board behind it showing a peg board-style design that the blocks can be inserted into. Each block has a designated place on the phone, and each is labeled with a symbol of its function, such as Bluetooth and battery.

The phone is disassembled by removing two screws on the bottom of the handset, at which point the board can be removed and the blocks with it. In theory, a new block can be purchased and used to replace the old one, replacing a faulty component or updating an existing component to something more robust or higher capacity.

Calling this “the phone worth keeping,” Phonebloks plans to raise awareness for the handset design and its ambitions on October 29, when a massive social media push will start to “show the world” that there’s demand for such a concept. Whether those ambitions will prove well-founded or the handset will wither away, never to be seen again isn’t known, is yet to be seen, but the concept is intriguing nonetheless, and certainly has some appealing aspects.
September 15, 2013By JoeBrownTech Talk

This is all about Joe

Brute Force attacks on your WordPress site- what do you do?Sixth Sence Technology
Categories
Progress
What do our clients say?